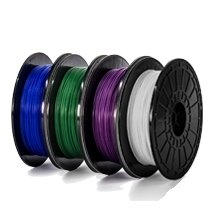 Flashforge is an American company specialised in 3D printing. They produce 3D printers aimed at individuals and professionnals. Flashforge was created in 2011, and has since sold thousands of 3D printers all over the world.

The company counts on a team of 3D printing passionate specialists. Flashforge also sells filaments for its 3D printer the Flashforge Finder, which only works with these filaments.

Finder filaments are sold in spools of 600g, with 1.75mm diameter so as to adapt perfectly to the Finder. These filaments are specially designed for the Flashgorge Finder which is one of the makes 3D printers aimed at people who wish to discover the 3D printing world.